There are two major historical passions in my life and they both were seeded in the late 1950’s. The first being the Alamo that began in 1955 with Davy Crockett on TV and the other Classical Greece, which began when I saw the Steve Reeves Hercules movie in 1958. The postings that I will be sharing with you this time will not be just photo’s and history as my others, but also my reflections on this dream fulfilled.
The Capital of Greece is the City of Athens, the largest city in that country, and at over 3,400 years old it’s the worlds oldest. Athen

s is also home to two UNESCO World Heritage Sites- Daphi Monastery and the Acropolis of Athens. In the middle of the 5th Century BC when Athens was the center of the civilized world and at the height of its power its leader Perikles, felt that the city needed a focal point to show off its importance and began building on this ancient rock top in 480 BC. The Acropolis, Parthenon and the other temples on its summit was the image of ancient Greece for me.
I joked to Karen that I wanted to be young enough to be able to walk to the top of the Acropolis without a walker or a wheel chair. Not realizing how true that was. There is only one way to the top-and that is walking, or more like climbing!
The first photo is of the Acropolis from at its base, the second is of us being almost there- on the left is the Temple of Athena Nike which is next to the Propylaea, the entry to the temple site. I made it, with the Parthenon in the background.
Built between 447 and 432 BC the Parthenon was dedicated to the Greek goddess Athena, the city’s patron goddess. Inside this temple was the massive statue of the goddess made out of Ivory and Gold by Pheidias (his name will come up again later). After the decline of Athens and Greece the statue was sent to Constantinople (Istanbul today) where it was melted down. The temple over the centuries was used as a Christian Church during the Crusades, and a Mosque when Turkey ruled Greece. Heavy damage happened to the temple when the Turks used the Parthenon to store gunpowder- and it went off. Restoration has been on going since 1980.

The temple with the six maiden figures is called the Erechtheion, and was built in 420 BC, also to Athena. The last photo is from the top of the Acropolis looking down at Agora, the site of the ancient city of Athens and the home of Democracy.
You are allowed to walk around the temples freely and even off the limited paved paths. When I ventured off the path to see the Parthenon from another angle I slipped on a rock. Looking down I saw it was granite that had been worn smooth from all the feet that had walked there over the millenniums, and now I was one also. 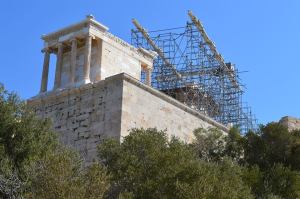 Stuck in Sydney and posting old photos I've taken with various camera phones over the years. To make it more interesting, now in Black and White with sarcastic commentary.