The last stop on our tour was the island that travel agencies call Santorini. This Greek island was one of the most anticipated stops for me, because of its geological formation and history, both real and mythical.  Santorini has another name, and perhaps even a third that is even more famous.

The name Santorini comes from when the island was part the Latin Empire in the thirteenth century. Today Greece has officially restored the island to its classical Greek name, Thira, or also spelled as Thera. The island has also been attached to an even older, mythical name and legend that I’ll cover in a future post.

Thera is part of a small archipelago of islands at the far southern end of the Cyclades group. The Thera archipelago is made up of five islands, with the named island being the largest. The others are the inhabited island of Therasia and three uninhabited islands of Nea Kameni, Palaia Kameni and Aspronisi. Nea Kameni and Palaia Kameni are the newest islands of this group, because this is an active super volcano.

When you sail into the volcanic caldera of Thera the first thing that you see is the amazing sheer side of the main island. This western side raises more than nine hundred feet above the sea, with its white stucco buildings, and their colorful roofs, hanging on its top edge.

There are three ways to get to the top: one is to walk up, two, take a donkey, or three, some type of motor vehicle. Ours was by motor coach, and that was an experience. Remember this side of the island is almost straight up, nine hundred feet. And to drive up this winding, narrow road with a 60 passenger travel bus, my hat is off to the Greek bus drivers of Thera.

As I mentioned Thera is a super volcano. Its two major cities sit on the western rim of the crater.While the east side the the island slopes gently down to the sea.

Thera, like all of Greece, has beautiful churches to visit. There are big ones and small one all over the island. The number of churches reflects how devoted the Greek people are to their religion.

Greece, and its islands, have a national religion- Christian Greek Orthodox. Over 90% of all Greeks passionately practice this religion. The Greek Orthodox is a branch of the Eastern Orthodox Church. 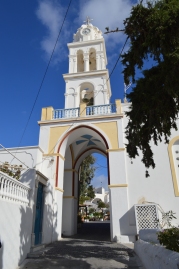 And the Eastern Orthodox Churches make up the second largest Christian church group. It is also are one of the oldest religious institutions in the world, claiming that their practicing dates back to the original faith passed down from the Apostles.

In future posts I will explore the volcanic, archaeological and mythical history of this beautiful Greek island of Thera.

One thought on “Santorini? Thera? Or is it Atlantis?”

Australian Traveller that loves to "Roam" our globe, creator of ENDLESSROAMING.COM sharing the experience through word and photography. Currently residing in my home of Newtown Sydney

The Historical Diaries
Samantha In Melbourne