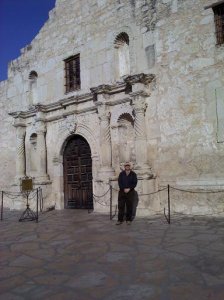 Me standing in front of the Alamo Church

What I like about history is not just what happened but also what caused it to happen, what happened because of it and were there anything else that happened that was like it throughout history. Also when I visit historical locations I try to visualize and feel what happened there and how it looks today compared to how it did when the event took place. I am hopeful that you can see history this way in my posts. 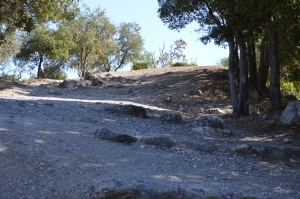 The 1836 Battle of the Alamo and the 480 BC Battle of Thermopylae are two events that have been linked throughout history. Thermopylae has been called the “Alamo of Greece”, even though it took place 2,316 years prior to the events at the Alamo. One of the first inscriptions to the Alamo on a monument by Thomas Jefferson Green in Austin, Texas  said, “Thermopylae had her messenger of defeat-The Alamo had done.” Even though Green’s statement isn’t quite correct historically he still saw a connection between these two battles. I have been deeply interested in these battles since childhood. From my studies, I have found that, besides the fact that each battle had a small number of men fighting a much larger army to the death, there are other surprising similar aspects to these two famous last stands.

Both battles and those that fought in them grew to legendary status. Both battles had few survivors or eye witnesses who could accurately relate what happened. At Thermopylae there where a few of the Spartan Theban Hoplites (slaves) who surrendered. At the Alamo there were a few women and William Travis’ slave, Joe, who survived. The Hoplites remained slaves to the Persians and, as slaves, had no say. At the Alamo, the women and Joe were hiding during the battle and could not give an accurate account.

The Cenotaph to the Alamo Heroes on the Alamo Plaza

Location also played a role. The passes of Thermopylae and San Antonio were both gateways to the regions both the Spartan and Texan defenders were trying to protect.  The Persians had to pass through Thermopylae to get to the Grecian heartland and the Mexican Army had to take San Antonio to get to the Texan Colonies.  Also, neither the Greek City States or the Texan Colonies were prepared to fight a large scale invasion. The Greeks were celebrating festivals and the Olympics and couldn’t put together an army in time and the Texans didn’t expect Santa Anna and his army to arrive until later in the spring.  So, it was left to King Leonidas of Sparta and the 7,000 warriors he could raise to go to Thermopylae and stop the Persians and Travis with his 200 men to hold off Santa Anna and his army.

Both Leonidas and Travis were expecting reinforcements who didn’t come. However, both did have some sacrificial support. At the Alamo on the night of March 1, 1836 thirty-two men from the city of Gonzales rode through the Mexican lines to aid their friends in the Alamo. Even though they knew that they were going to their deaths, they told Travis that they didn’t want those in the Alamo to think they were forgotten.  At Thermopylae it was the 400 Thespians who chose to stay and stand with the 300 Spartans rather and retreat. 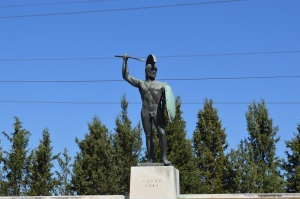 Statue of Leonidas, King of Sparta and leader of the 300

Both the battles of Thermopylae and the Alamo delayed their attackers long enough to allow the Greek City States and the Texan Colonies to organize an army strong enough to defend themselves. Also, both battles raised the passions of the Greeks and the Texans in standing up to their aggressors and, although we don’t have any record of a Greek battle cry of Thermopylae, we do have “Remember the Alamo!”

Are there any similarities in the aftermath of these battles that we should consider? Yes, if you consider what the world would be like if Xerxes had conquered Greece and made it part of his Persian Empire and Santa Anna had put down the Texas rebellion. Greece and the Greeks were not only the cradle of western civilization but the very seed of it. What we call our western culture took root just after this Greek/Persian war. Rome, which took a lot of its culture from the Greeks, would not be founded for another 87 years. In fact, Italy and its islands had Greek colonies on them and Europe was still tribal. If Persia had taken over Greece they would have gone on to spread throughout the Mediterranean and most likely Europe, because there wasn’t a civilization large enough to stop them. This would have changed the culture of Europe, and since we got our beginnings there, ours also. If Santa Anna had been able to put down the rebellion in Texas, then Texas wouldn’t have become a Republic, and then become a State, which caused the Mexican/American War that gave us all of the Southwest and California, and made the Untied States span the Continent.

Thermopylae and the Alamo- two small battles with just a few heroic men that stood, fought and died for what they believed, but much deeper than that- they altered the course of history.

14 thoughts on “The Alamo and Thermopylae: a Comparison in History”

Australian Traveller that loves to "Roam" our globe, creator of ENDLESSROAMING.COM sharing the experience through word and photography. Heading to the USA this coming June